We are dedicated to getting outstanding legal results quickly and efficiently for our clients.

Born and raised in nearby Chicago Heights, Jason attended Marion Catholic High School where he played baseball and participated in Spartan Choir. Following high school, Jason enjoyed a career in the Fiber Optics and Tele-Communications fields before deciding to follow his true calling, the practice of law. Determined, he attended and graduated from the University of Phoenix with his Bachelor’s of Science in Criminal Justice Administration in 2007 while working two jobs to support his family.

Jason graduated from Valparaiso University School of Law in 2010 and hit the ground running, starting his own firm immediately after being admitted to the practice of law that same year. Since that time, he has focused his practice in the areas of Personal Injury, Criminal, Family Law, earning his reputation for being a no-nonsense litigator and understanding counselor. Jason believes strongly in taking a practical, straight-forward approach to solving his client’s legal issues.

Jason resides locally in Crown Point with his lovely wife, Bridget, and their three children. His personal interests include CrossFit, golfing, and spending time with friends and family. 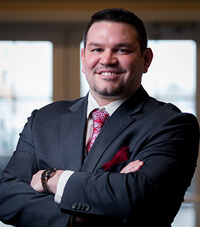 Miguel was born and raised in southern Arizona, the oldest boy of a large family on the J-6 Ranch where he learned the importance of hard work and the value of an education. By the age of 16, Miguel was already enrolled as full-time college student and received his Bachelor’s Degree in Music Business from the University of Arizona at age 20. Relocating to the Midwest, he graduated early from Indiana University School of Law in 2009 and was admitted to the practice of law in Indiana at the age of 24, the state’s youngest licensed attorney at the time.

Since teaming up with Jason in 2012, Miguel has primarily focused his practice in Consumer Bankruptcy law and Personal Injury. Miguel believes that the best lawyers are those that can balance human compassion and legal strategy while putting the bottom line into terms everyone can understand.

Miguel resides in Crown Point with his lovely wife, Erin, and their eight children. Although he’s kept busy, Miguel is an avid musician and mixed martial artist and attends the Immaculate Heart of Mary Chapel in LaPorte. Valuing his faith, family, and community above all, Miguel strives to serve his clients legal needs with confidentiality and professionalism. 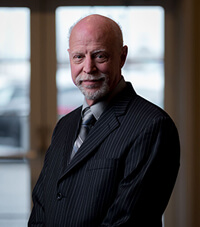 *In Memoriam: Moseley & Martinez would like to acknowledge the extraordinary professional and personal contributions Attorney Matern made to our firm and local community during his tenure. A loyal friend and valued member of our legal team, Daniel will be deeply missed by his family, friends, co-workers and clients. Requiescat In Pace

The son of a Lutheran Minister from upstate New York, Dan attended Valparaiso University for undergrad and enjoyed it so much that he didn’t go far, graduating from Valparaiso School of Law immediately thereafter. Since passing the bar in 1995, Dan has focused his practice on consumer bankruptcy, having several thousands of bankruptcy filings to his credit.

Before beginning his legal career, Dan enjoyed a career in stand-up comedy and remains very active in local theater. An accomplished musician, he plays cello and piano among other musical instruments.

Dan’s experience inspires his clients with confidence while his attention to detail and gentle personality remind them that, at M&M Law, they are not just another file in a pile. Dan and his wife are self-confessed animal lovers who reside happily in Chesterton. 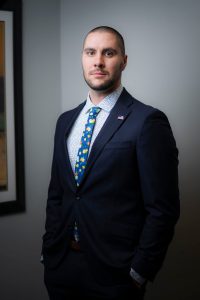 James A. Hoffman is an Associate Attorney with a primary focus on complex personal injury litigation, including: accidents involving automobiles, commercial trucks, motorcycles, pedestrians, and bicycles. He is also involved in dealing with injuries caused by negligence (dog bites, slip & falls, etc.), as well as wrongful death accidents. During his time as an attorney, James has represented hundreds of injured clients and is dedicated to each and every one of them with a modern, easy-going, client-first style.

Originally from a small, rural town in Central Illinois, James attended Western Illinois University for his Bachelor’s degree. Having the aspiration to become an attorney from the age of 8, he subsequently attended Valparaiso University School of Law and immediately started specializing in personal injury. James has held steadfast on representing clients injured through no fault of their own, and assuring they do not get taken advantage of by large, multi-billion-dollar insurance companies.

Prior to his post-secondary schooling, James made the selfless decision to enlist in the U.S. Army as a Field Artillery Tactical Data Systems Specialist. While serving, James was primarily responsible for operating and maintaining secured communications systems, creating firing plan schedules and confidential mission processing while also directly overseeing and training subordinate soldiers to simultaneously operate multiple Advanced Field Artillery Tactical Data Systems for both cannons and rocket launchers, used to support infantry and tank units in combat situations. In 2010, James, a decorated Veteran, was deployed to Sinai, Egypt as a part of a multi-national mission to supervise the implementation and prevent any violation of the security provisions of the Egyptian-Israeli Treaty of Peace. During his deployment, his battalion was also used as a reactionary force in further support of Operation Enduring Freedom in Iraq. 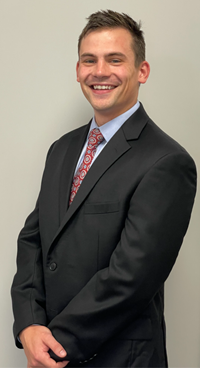 Jacob E. Payton is an Associate Attorney at the Law Offices of Moseley & Martinez, LLC. Jacob attended Indiana University in Bloomington and graduated with a Bachelors degree in Economics in 2014. During undergrad, Jacob was a member of the Indiana University Mock Trial team and has competed in numerous competitions through the United States. After receiving his Bachelors degree, Jacob decided to further his education and pursue a career in Law. In 2016, Jacob attended Indiana University Robert H. McKinney School of Law and graduated in 2019. During law school, Jacob was an active member amongst the student body and competed overseas in Vienna, Austria at the 2019 Willem C. Vis International Commercial Arbitration. Jacob currently practices numerous areas of law such as criminal, bankruptcy, family, and debt settlement.

Born and raised in Lowell, Indiana, Jacob is the youngest of eight kids in his family. Jacob often references William Golding’s novel, “Lord of the Flies”, when asked about his upbringing. Though raised in Indiana, Jacob is an avid fan of the Chicago Bears and the Chicago Blackhawks. On his free time, Jacob often performs at live venues throughout Northwest Indiana with his hometown band, Busted Knuckles.  Jacob also has an Aussie-Doodle (half Australian Shephard, half Poodle) named Milo, that he believes is a Muppet. 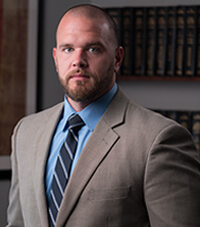 Codey L. Spear graduated from the Valparaiso University School of Law in 2016 and has practiced in various areas of law including criminal, personal injury, bankruptcy, and family law. Since joining the Law Offices of Moseley & Martinez, LLC, Codey has taken pride in representing his clients’ diverse needs with a focused, client-first approach, in both civil and criminal litigation.

Codey is an Indiana native having been born and raised in the small, central Indiana town of Crawfordsville. Upon graduating Crawfordsville High School, Codey attended Indiana State University, where he received a Bachelor’s Degree in Music Business Administration. While at Indiana State, Codey was a member of the Indiana State University Sycamore Football team, playing center and guard on the offensive line. He also was a member of Indiana State Jazz Band, Wind Orchestra, and toured Bangkok, Thailand playing alto saxophone in the Nomine Saxophone Quartet.

When not advocating for his clients, Codey enjoys spending his free time in the gym and riding his motorcycle with his wife, Katrina. As an avid strength athlete, Codey is decorated competitor in both strongman and powerlifting, regularly participating in both Indiana and Illinois competitions, even earning a spot in the 2018 United States Strongman Nationals.